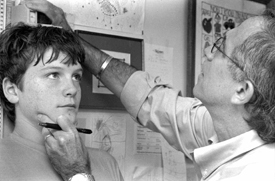 Escalating health care costs have been a drain on the budgets of local governments and often lead to corresponding increases in property taxes or decreases in municipal services, such as road repair. In addition, communities with high numbers of uninsured or underinsured people face additional burdens as local providers and humanservice programs must bare these costs.

In Vermont’s capital, Montpelier, health insurance increased 18 percent for the fiscal year 2010 budget and it has risen 94 percent in seven years! This has lead to an enormous financial burden that can only be met by raising taxes, cutting jobs, or reducing municipal services.

Meanwhile, Medicaid, which covers those with the least ability to pay for health care, is a constant strain on the state budget.

By contrast, if everyone paid into a single risk pool, no municipality would have to worry about what level of employee health insurance it could offer. Likewise, the state budget would benefit from the savings inherent in single payer’s more efficient reimbursement system.