The Doctor Is Out: Why Independent Physicians Are Disappearing From Vermont

As a physician in private practice, Dr. Laura Norris decides for herself how many patients to see each day. She often schedules 30- and 60-minute appointments even though a jam-packed schedule would bring in more money, because she believes that having time to ask patients about their kids, jobs and even their summer crop yield makes her a better doctor. She has practiced this way for 26 years, and she has loved every one of them.

“It’s been my dream job,” she said in her office at the Cambridge Family Practice last month. “There is no clock ticking behind me.”

Lately, though, Norris no longer feels like time is on her side. Three nurse practitioners are leaving for higher-paying jobs, and Norris has only found one replacement. More troubling, her three physician colleagues expect to retire in the next few years, and she has little hope of recruiting successors with the salaries she can offer. Before long, she will be the practice’s last remaining doctor.

Independent doctors are a dying breed in Vermont. Fed up with shrinking margins and grueling hours, dozens of physicians have left private practices in recent years, retiring early or joining hospitals or rural health centers. Those who have stuck it out are getting older, and many expect to retire within a decade.

There’s no wave of replacements waiting in the wings. Buried in medical school debt, most young doctors have no interest in running a business and seek salaried jobs where they can count on a steady paycheck and better work-life balance. The idealistic few still drawn to small-town medicine have second thoughts once they learn what they would make at many Vermont practices. Some doctors, particularly those in rural areas, now doubt that anyone will take their place.

“I’m irreplaceable,” said Dr. Donald Miller, Norris’ business partner, who opened the Cambridge practice 46 years ago. “That’s not because I’m some super doctor. We just can’t pay enough to bring someone in.”

Long-term, this could amount to fewer choices: More patients will be forced to seek care from hospital practices, where wait times are long. More doctors will decide to work for larger institutions, where they will have less control over the patient experience.

This might not concern those born into the age of corporate health care, or those who treat their doctors like WebMD: Just figure out what’s wrong and how to fix it. And consolidation isn’t always bad. Bigger organizations have more opportunities to coordinate a patient’s care, which can result in better outcomes, and many hospital doctors still succeed in building relationships with those they treat.

But many people desire a more intimate bond with their doctor, something private practitioners say they can best provide.

“It’s just like how going to the general store to get your cup of coffee isn’t the same as going to Starbucks,” Norris said. “Being known, being understood, feeling like you’re not just a number — all of that, I think, ultimately leads to satisfaction.”

The number of private-practice doctors in the U.S. has been dwindling for decades. Last year brought a milestone: According to the American Medical Association, doctors working for hospitals or health systems now outnumber those in private practice for the first time ever.

The breakdown has historically been even more lopsided in Vermont. Roughly half of the state’s doctors were independent a decade ago, but the share had fallen to just 31 percent by 2017, according to a state analysis that year.

It’s hard to know how many are left in private practice today — no one regularly tracks this number — but anecdotal reports suggest that the decline has continued. The advocacy organization that represents many of the state’s independent doctors, Health First, lost 15 members over the last four years and is down to 128.

Rural areas have been hit hardest. Practices there often have lower-income patients, who are typically on government-funded health care plans that reimburse doctors less. It’s also harder to convince doctors to start their careers and raise families in places with few amenities. Franklin County had 11 independent pediatricians less than a decade ago. Now there’s only one.

“And I beg him not to retire every time I see him,” said Liz Parris, who takes her six children to that last man standing, Dr. Joe Nasca. “I wouldn’t know what to do without him.”

When private practices close, access can suffer, particularly when doctors retire or leave the state. Shuttered outfits aren’t easily replaced; it can take years to recoup high startup costs. Hospitals, meantime, have their own recruitment challenges, and many practices haven’t expanded in years.

Meanwhile, Vermont’s health care system is feeling the strain of an aging population and, more recently, the pandemic. Independent doctors say they can continue to play a vital role in keeping Vermonters healthy for years to come. But first, they need to survive. 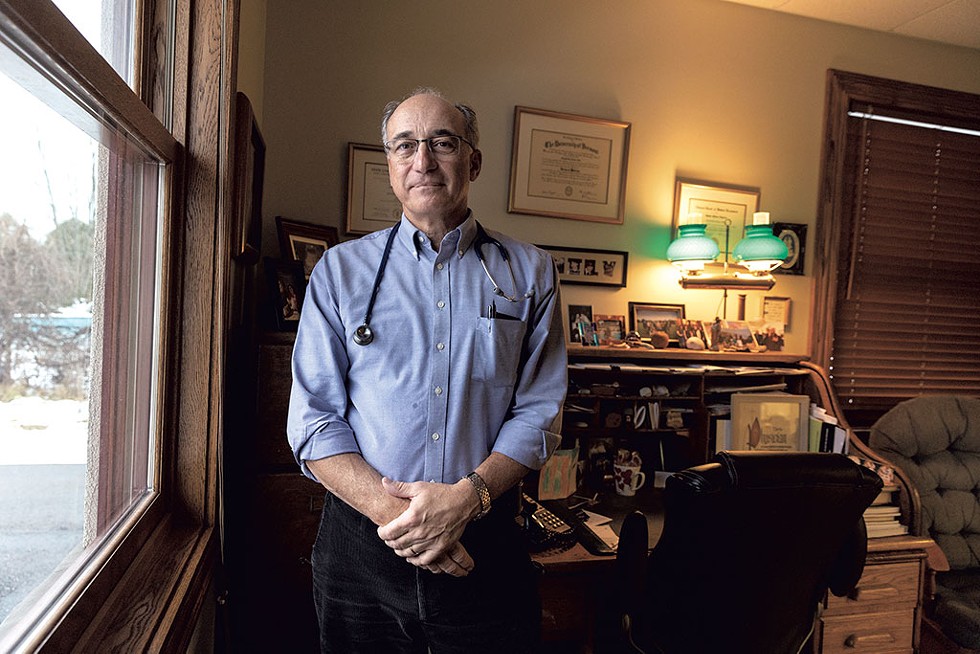 When Dr. Paul Rogers opened his Johnson primary care practice in the mid-1980s, he employed just one person to schedule appointments, stay in touch with patients and bill for his services. When he retired more than 30 years later, he was paying four people for the same work, and they still struggled to keep pace with all the demands placed on a 21st-century doctor’s office.

Running a private medical practice isn’t cheap, and since independent doctors base their income on the bottom line, many have devised creative ways to keep their overhead low.

Many practices still use paper medical records, refusing to switch to more expensive electronic systems. Some doctors enlist their spouses to pitch in on bookkeeping and maintenance tasks. A Richmond pediatrician, Dr. Paul Parker, even shovels his own parking lot.

At Cambridge Family Practice, Norris and her colleagues take penny-pinching to a new level. Homemade curtains cover the exam room windows, obscuring views of cornstalks and a baseball field. A room for minor surgical procedures doubles as a storage closet. “We’re even counting paper clips,” quipped Dr. Deb Richter, who is one of the four docs. Still, certain expenses can’t be cut, and the cost of running the practice goes up each year.

While businesses usually respond to financial pressures by raising prices, that’s not an option for independent practices, which rely on reimbursements from insurance companies.

Government insurers — Medicare and Medicaid — have barely increased the rates they pay in recent years, forcing both independent practices and hospitals to rely more on commercial insurers for revenue. These companies in turn face pressure to keep their reimbursements low, since each increase trickles down to ratepayers. With only so much money to go around, hospitals and private practices end up competing for dollars.

It’s not much of a fight. Hospitals have more bargaining power and can negotiate higher rates, whereas independent practices say they must practically beg commercial insurers to come to the negotiating table. That’s why hospital-employed doctors get paid more for the same services.

Hospital leaders defend the disparity by noting that they provide a broad range of services that don’t see many patients but are important to the community, such as neonatal and trauma care.

The de facto referee in this David versus Goliath fight is the Green Mountain Care Board, which determines how much money hospitals can demand from insurance companies each year.

Vermont attempts to limit health care cost increases to 3.5 percent annually, but hospitals often insist that they need much more and threaten to cut services should they be rebuffed. This year, nine of the state’s 14 hospitals asked to charge commercial insurers more than the state’s growth target. The University of Vermont Medical Center received permission to hike commercial rates by 6 percent.

Meanwhile, independent practices can go years without substantial rate increases. “And at the very same time, those same insurance companies refusing to negotiate with us are increasing their premiums, which we have to buy for ourselves and our staff,” said Dr. Toby Sadkin, a primary care physician in St. Albans. “The math is pretty simple: It doesn’t work.”

Sadkin and her colleagues are now negotiating with Blue Cross Blue Shield of Vermont for what they hope will be their first rate increase in more than five years.

Attempts to close the pay disparity have gained little traction. State regulators contend that raising reimbursement rates for independents would only make health care more expensive. Insurers, of course, agree. “While equal payment is a compelling argument in its simplicity, it’s not realistic for our health care system,” said Sara Teachout, director of government and media relations at Blue Cross Blue Shield of Vermont. “Health care wouldn’t be affordable at all.”

“We need balance. We need options,” Ridzon said. “We need this low-cost, high-quality network, because as a Vermont health care consumer, I don’t want to have to go to a hospital and pay hospital prices for care that does not need to be done there.”

The Green Mountain Care Board surveyed doctors several years ago to learn more about their biggest frustrations. More than a third of the 88 participating independents cited reimbursement rates as one of the biggest threats to their practices. They said they keep their practices alive by working longer hours and always making themselves available — a trajectory many said was unsustainable.

Those who had left private practice for salaried jobs overwhelmingly pointed to the increasing costs of running a practice as a key factor.

Dr. Judy Orton, an independent pediatrician in Bennington, once expected to work well into her late sixties. But now, the 61-year-old doctor says she’ll be lucky if she can find the energy to make it another few years. “I’m tired of trying to figure out how to make ends meet,” she said.

Rogers, the retired Johnson doctor, started looking for his own exit six years ago. Knowing that he could never sell his practice, he tried instead to give it away. But he found no willing takers after three years, and in 2018, he closed his practice for good. He’s since joined Cambridge Family Practice, where he works one day a week.

Solo practices just aren’t economically viable anymore, Rogers said, especially for new graduates, who can leave school with up to $300,000 in debt.

“I doubt there will ever be another doctor in Johnson again.”