A single-payer healthcare system? I’m all for it!

We wanted to share Felix’s story and observations of different healthcare systems around the world. It is long but well worth the read! Thanks, Felix. 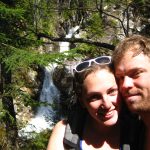 Felix and his wife in Vermont.

My name is Felix, I am 26 years old and grew up in Germany. After graduating high school I traveled the world for over four years. I lived a year in Canada and ended up falling in love with an amazing US-American young woman while traveling down the US-west coast in my minivan. We married in September 2012, I got my green card and a few months ago we bought land in Guilford, Vermont to build a home for us there.

So you see, I know things about the world and I know things about getting sick and health care. I grew up knowing the German health care system. On my trip I had to get treated in India for a few serious health issues. I broke my wrist in Canada. I had to visit hospitals and doctors for various other problems in Greece, Slovenia and finally even in the USA. That’s just part of life. We live, we get sick, we hurt ourselves. Everyone does!

In (almost) all of those places healthcare was affordable. A visit to the doctors in India for an ear infection cost me just over $2 (including the medication). Emergency room care for a splinter in my eye in Slovenia was paid for through my German insurance (which at the time cost me 150 Euros/month, no deductibles) because it was valid all throughout the EU. In Canada I broke my wrist which cost me $750 including: a visit to the ER with x-rays, a cast, pain medication and follow-up appointments at private doctors offices with more x-rays and further treatment. I thought that was already a high price but greed has no limitations. The same injury would have cost me in the USA possibly tens of thousands of dollars when paying out of pocket. And there is no justification for such a price tag whatsoever.

When I slipped on ice in March of 2013 I thought I broke my leg. We rushed to a hospital in Keene, New Hampshire. I was in there for 20 minutes, out of which were 10 minutes waiting, 5 minutes for the x-ray, 3 minutes more waiting and 2 minutes talking to a doctor. She told me the diagnosis: “… Sprained ankle. Stay off of it for a few weeks. That’s all you can do.” No treatment, no medication, no nothing. That was OK with me. What was absolutely not OK with me was the bill for that diagnosis, about $1400. And that was with health insurance. Where in the world does so much money go for a service that should have cost a fraction of what it was? To the doctor? To the CEO of the hospital? To insurance companies that protect practitioners from law suits? I was outraged!

I always knew (generally most of the people in the rest of the world know, too) how depressing the health-care situation is in the USA. How come “the greatest nation on earth” is so far behind all other developed nations and many developing nations on planet earth? My theory is that it has to do with the Cold War. No other country opposed so viciously the Soviet Union and it’s ideology. Propaganda has been hammered into people’s minds that socialism is the most evil thing ever (as it was on the opposing side with the opposite view). To be fair, the form of socialism (specifically Stalinism) that was exhibited by socialist nations at that time should not be the role model. However, the downfall of that opposition is that it has led to a blanket fear of any and all things “socialist.” It seems that still these days people react absolutely allergic to any social behavior or social programs proposed by the government. I think that’s the most obvious reason why there is no affordable and effective health care system in the USA. Such a system has to be based on the solidarity principle which itself is rooted in socialist (social) principles. The strong support the weak. We will all be the weak ones at some point in our lives! There is no other way to get a society as a whole insured. I can already hear the outcry of critics. But guess what: America (and Vermont) does have socialist systems in place already and that is good! The school system is socialist. Everyone pays property taxes, no matter if you have children or not, which are used to finance the schools of your county. Fire fighters and policemen are paid through taxes which makes their employment socialist. You can’t run a country entirely within the private sector. The public just has to fund certain key services to make a society efficient, humane, fair and possibly even existent in the first place. If there is nothing that holds us together than we are just scattered groups of people that happen to live next to each other on the same continent. Choking down the Pledge of Allegience in school just doesn’t do it. More is needed to create a sense of unity. Caring for one another is the first and main ingredient to achieve that.

Imagine you have to call the police because you get robbed. The police catch the robbers but leave you a bill for their services. Such a world is not governed by the people but by corporations and privatized monsters. That is a neoliberalistic world of completely unregulated markets where people get rich through the complete exploitation and downfall of other people without consideration for life or the planet. In such a world, we would all just be squeezing each other out for more money and more profits. Do you really want to live like a bunch of tics trapped in a jar sucking from each other’s last bit of blood you could get a hold of? This is how I see the current health-care system in the USA. It is a profit driven system where money is made through the suffering of many to provide some very rich with their sick lifestyle. That is perverted! Money is not charged to just cover the costs for treatment. Way too much money is charged to fill some very greedy pockets. Many other countries have proven over the decades that an alternative is possible.

But where should the money come from to implement universal health care for everybody?

Taxes, of course. And I can already hear the second outcry. Let’s not be naive. An increase in taxation would be probably the most likely scenario for the successful implementation of such a system. If there however would be a radical rethinking on a federal level on how the government spends it’s money then the country would be flooded with cash not just for a new health-care system but possibly all kinds of other good programs. For example:  A big chunk of all taxes is spend on the biggest earthly military to rage war once a decade in different parts of the world to protect US-American interests while killing people and destroying infrastructure and cultures. Instead of doing that we could actually use that money to help people right here where help is needed. Of course that is a very far fetched proposal. The military-industrial complex is woven into the identity of the country far too deep to go anywhere soon. So it is up to each state to come up with solutions.

I would be more than happy to pay a higher income tax for a government health insurance to compensate for all the ones who don’t pay into the pot but are still taking out of it. I would be happy to do this because there probably would be a day when I loose my job or get old and can’t work anymore and I would still be covered. And, who really wants to live in a society that says: ”Oh, you lost your job and you can’t pay your health bills? Too bad. Just lay down and die and don’t be a burden!”

In Germany we pay a 20% sales tax on everything. Luxury items are taxed even higher. Income tax is higher than the US average. And yes, people are complaining. But nobody complains about being taken care off when you get sick. They don’t complain that when they loose their job they automatically receive welfare until they found a new one. They don’t complain that when a mother has a child, three months before and a whole year after giving birth she can stay at home to nurture her child (how it’s intended to be) while getting paid by the government. She then gets her old job back (legally guaranteed). And they don’t complain that universities are almost completely free. After living in quite a few other countries, I realized how incredibly well off Germans are, how good they have it and what a crazy bad deal Americans get when it comes to the social network.

Not only are there good reasons individually for a single payer system but the whole country will benefit from it. Health care for all promotes a stable society. The more inequalities one finds in a society – like a disproportional distribution of wealth or health-care for the upper classes that can afford it but not for the underprivileged – the more tension appears within this society. Crime rates go up, a sense of community and unity is lost, the age old struggle of the classes and even civil war come out of it. Hitler got to power in Germany through the desperation of the people. When people’s basic needs are met and they feel secure, dangerous elements and forces have a harder time establishing themselves in society and government. From an economical point of view, healthcare for everyone makes sense. A healthy society is a productive society. Businessmen know that the fewer people get sick, the better it is for the whole company.

The real damage is when you can’t afford to go to the doctor for a little cold. When this cold turns into a full-blown pneumonia and you have to get care, you might be out of work for weeks. Too high health-care costs prevent people from going to the doctor when problems are still small. That damages the individual, the employers and the economy and drives up healthcare costs even more. It’s easier and cheaper to treat a cold than pneumonia.

I myself have had a rather annoying chronic cough for the last two years. I just can’t afford to go to the doctor right now. I’m too scared of the bill. Is it serious? Maybe. I don’t know. I should have checked it out long ago. Next time I fly to Germany I will go to the doctor. The air-fare will be pocket money anyways compared to an American healthcare bill.

I sometimes seriously doubt my decision to move to the USA. I feel like I am downgrading when comparing the quality of life between both countries. What keeps me here is the love for my wife and the hope that things get better. I think Vermont is moving in the right direction with it’s attempt for a single-payer health-care system that serves all Vermonters. Vermont could be an example of progressiveness once again for the rest of the nation if this idea gets enough support by the people.

So let’s do this and give back the country’s reputation: a place that’s worth living in. Wake up Americans – it’s time to catch up! Forward on the road of betterment is the only way to go!