Auditor: State spending on health care is ‘out of control’

State healthcare costs are soaring, transparency is declining and the University of Vermont Health Network (UVMHN) exerts outsize influence on the system, Hoffer told his audience on March 10.

“(UVMHN) is the most powerful economic and political entity in the state,” Hoffer said. “This is not to say that we don’t all love our doctors and nurses, because most people do. It’s about the administration of the system and how out of control it is.”

And though politicians may occasionally talk a good game, those in Vermont who have the power to launch meaningful reforms — Gov. Phil Scott, Speaker of the House Jill Krowinski, Senate Pro Tem Becca Balint and the chairs of the legislative healthcare committees — have not done anything to regulate the system or rein in its costs.

Hoffer based his presentation on recent research conducted by his office, which is responsible for gathering and reporting data meant to foster transparency and accountability.

Hoffer estimated that if Vermont’s health care costs had only increased “at the already absurd rate of the U.S. average, we would have saved — are you ready? — a billion dollars, in 2018 alone.”

Looked at another way, according to the Independent’s calculations, Vermonters paid roughly $1,500 apiece more for healthcare in 2018 than the average American.

“It’s really kind of interesting because some politicians talk endlessly about their fear and antagonism about tax increases,” Hoffer said. “A billion dollars! And there was no discussion at all. It just happened.”

“You can have good conversations about finding efficiencies in state government, or allocating resources differently,” Hoffer said, “but this (comparison) is very compelling.”

When Hoffer’s office produced a report on this trend a couple of years ago, it reached out to the Green Mountain Care Board (GMCB), which is supposed to regulate healthcare in Vermont. What auditors found was that the GMCB was looking at annual growth in gross domestic product (a measure of activity in the overall economy) to justify 3.5% yearly increases in hospital budgets.

“And I said, ‘Well that’s nice, but what does it have to do with the ability to pay?’” Hoffer said. “And they had no answer. Because it has nothing to do with people’s ability to pay. And yet (the GMCB) will not change. They will not deviate from that 3.5%. And it’s often higher, by the way.”

“This is ludicrous,” Hoffer said. “How can a board that is charged with regulating healthcare in Vermont believe that it’s OK to have the divergence of these lines?”

“Now, in truth, most state employees live in two counties or thereabouts — Chittenden and Washington — although they are all over the state in smaller numbers,” Hoffer said. “But how can we possibly justify paying this much more to one hospital compared to another? It makes no sense. And there’s no meaningful justification.” 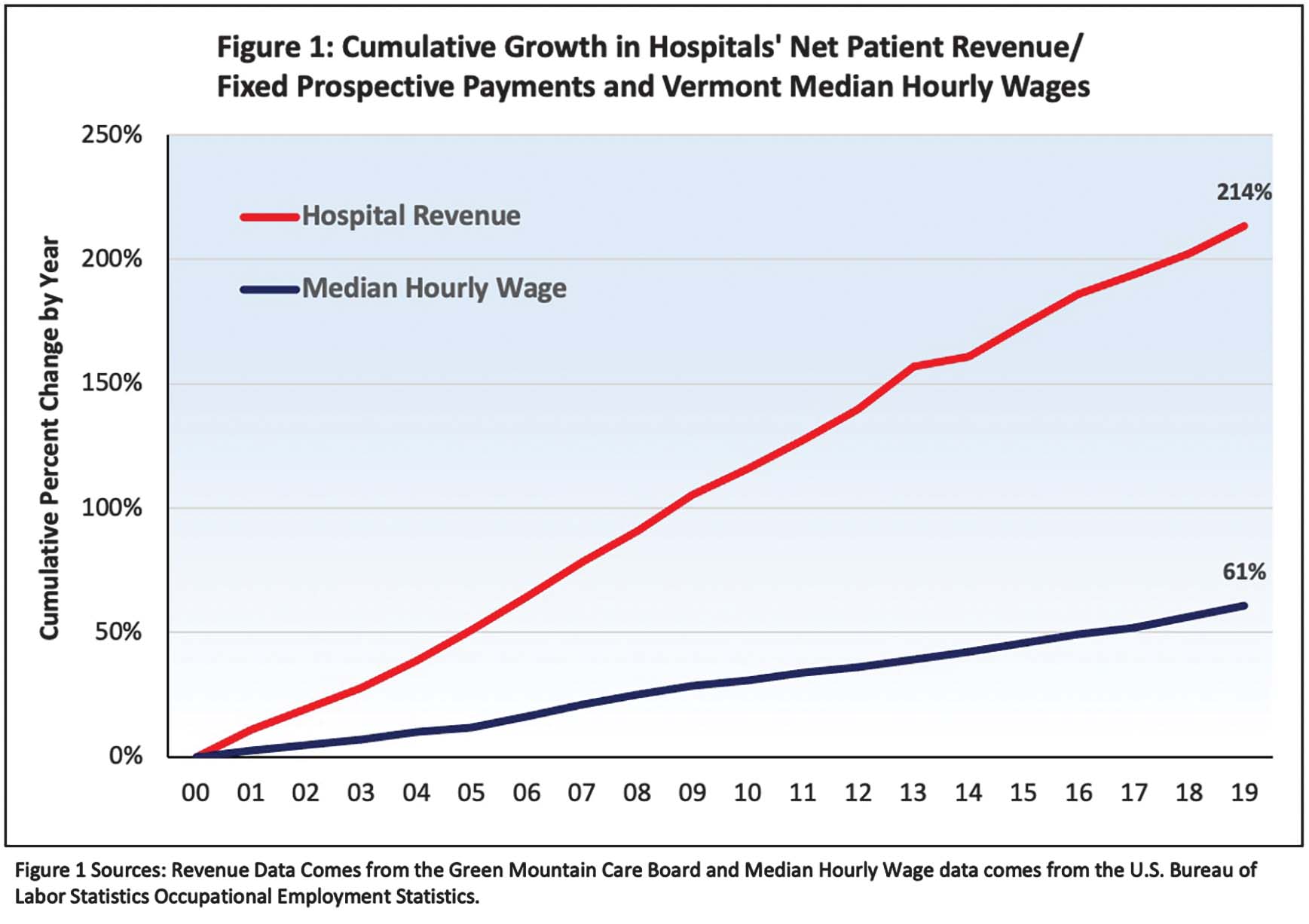 Hoffer and his office also found that the annual cost of healthcare for state employees, which has increased by 50% over the past decade, was almost identical to annual pension costs.

There has been a sense of urgency in recent years about addressing the “pension issue,” Hoffer said, “but I heard nothing about (healthcare costs) as an urgent issue.”

Progress is being made on these issues, Hoffer said — in a couple of other states.

“Minnesota did something interesting a few years ago,” he said. “They had some angry legislators who said, ‘You’re spending too much money, it’s out of control’ — which is not a bad point of departure for conversation — ‘you have to find a way to spend less or we’re just going to give you less, period.

“So a group of people got together and said, ‘You know, we’re a pretty big customer. How come we don’t have any power over these providers? They basically get to tell us what we have to pay them,’” Hoffer continued. “Year after year after year. They had the same kind of disparity for costs for different services like we do, as all states do. So they got their back up and they said, ‘Hospitals: This is what we’re going to pay you.’”

As a result Minnesota saved $47 million in three years, Hoffer pointed out.

In Vermont, as anywhere else, hospitals would fight such an approach.

“They would fight seriously, there’s no question about it,” Hoffer said. “But at some point we have to try to call the question.”

An hour-long discussion about such a complex topic can cover only so much ground, but when asked what citizens can do to demand change, Hoffer’s answer was succinct: focus on the Legislature.

“I think it’s fair to say the Green Mountain Care Board would not be responsive to an outpouring of citizen complaints,” he said. “They don’t answer to you. They answer to the governor and, if necessary, the legislature, which has not demonstrated a lot of interest in overseeing what they do.”

But no matter how thoughtful and focused Cordes and Hardy might be on these issues, their efforts at achieving reform can only get so far without support from their committee chairs, Hoffer said.

As Middlebury resident Ellen Oxfeld pointed out during the Q&A period of Hoffer’s talk, the constituents of these legislators are up against an industry that in 2018 spent twice as much money on lobbying as any other sector in the state, according to a 2019 investigation by VTDigger.

“As the healthcare sector’s share of the state economy has grown, the amount spent on lobbying at the Statehouse in Vermont since 2011 has also grown,” VTDigger reported. “Hospitals, providers, insurers and pharmaceutical companies have spent between $1.1 million and $1.8 million a year over the past eight years, or about $12.9 million total.”

After hearing from Hoffer, the Bristol Democratic Committee adopted a resolution on Vermont healthcare. Read the resolution here.

For more information about the work of the Vermont State Auditor, visit auditor.vermont.gov.